Why Elite Dangerous is s CULTURE SHOCK to console gamers

Reading the above title, you may assume it has negative connotations. It may well do to some. But to this sim inexperienced gamer, limited to the buttons on his controller, Elite: Dangerous has been a fascinating experience.

If, on occasion, a little frustrating. Yet, my fascination for its insanely slow - burning grind comes from a curiosity as to just how the hell Frontier Developments succeeds in keeping me around. 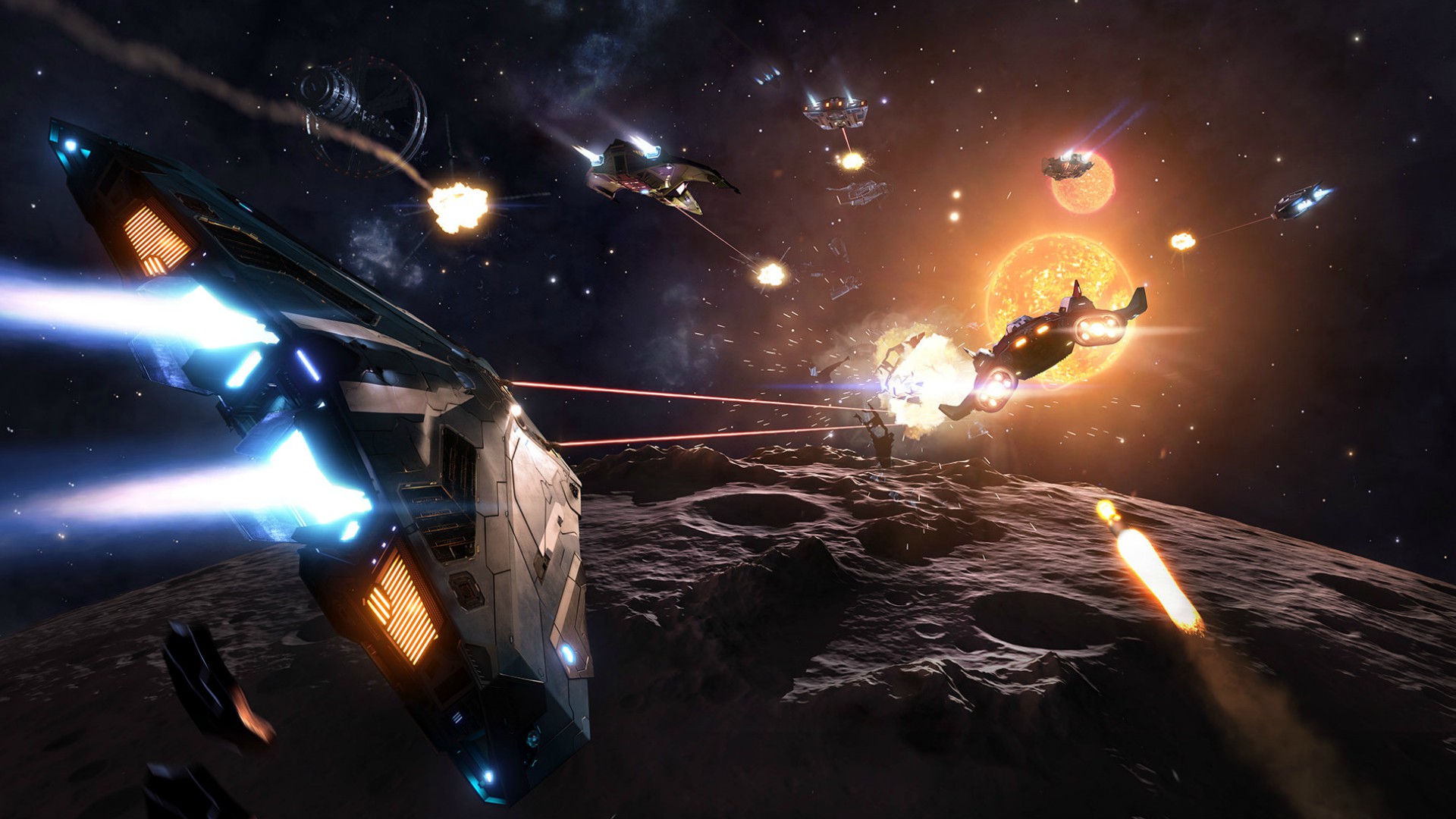 ELITE: DANGEROUS GOES TO SHOW WHAT NO MAN’S SKY COULD HAVE BEEN
This goes for both navigating your ship through a galaxy that somehow has no load screens and indeed, designing a proportionately accurate galaxy that takes literally real years to traverse. I hate to say it, but yes, I’m going to mention No Man’s Sky in comparison. Frontier Developments may have a much larger and far more experienced team at the helm (see what I did there), but Elite: Dangerous really makes Sean Murray look like a schmuck. 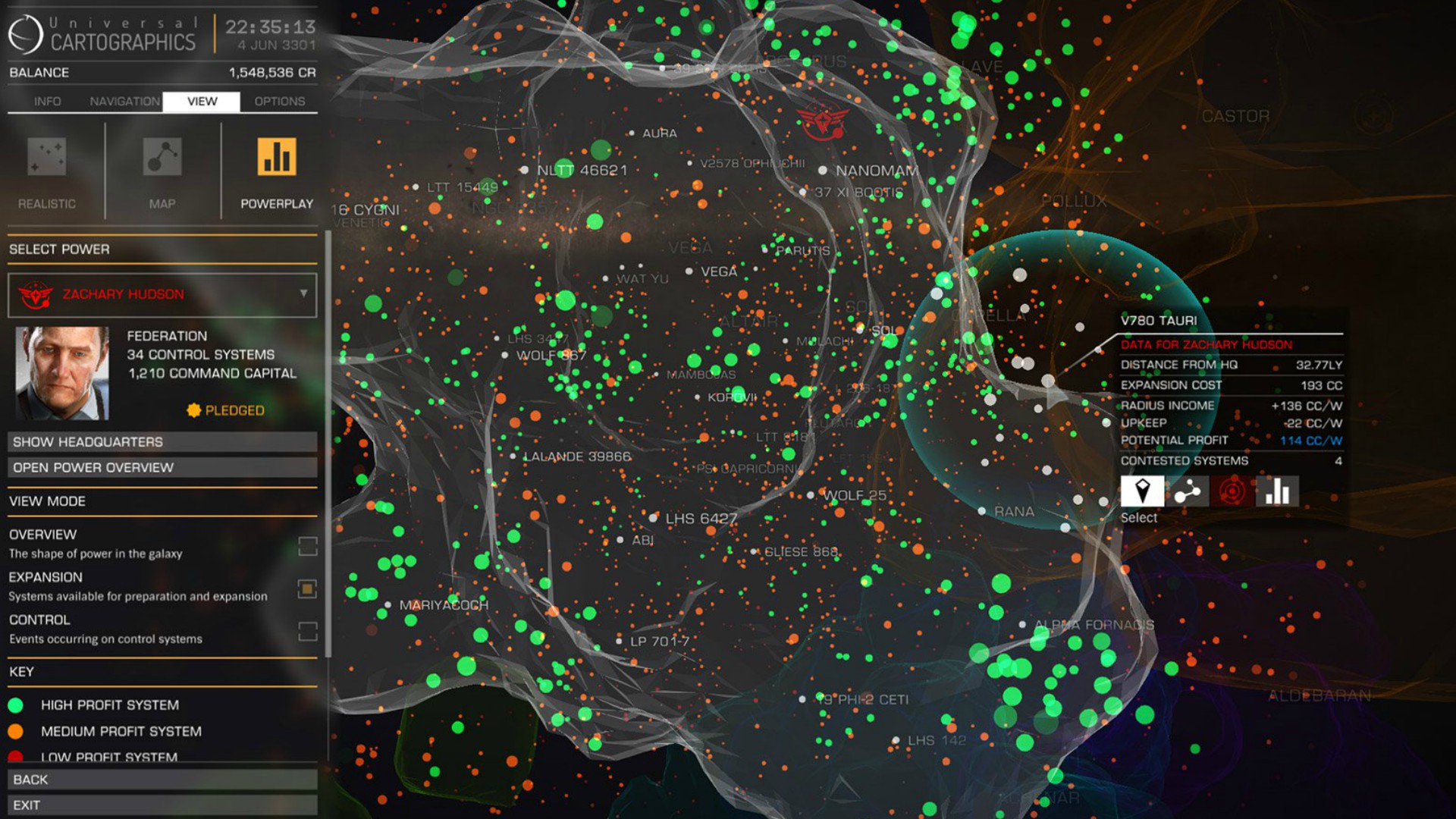 Not only has this galaxy been made possible but it instantly feels infinitely larger than Sean’s “universe”. Navigating these colossal systems with any semblance of knowing where you’re going or what the hell to do demands a complexity of gameplay decisions that many a console gamer will not be attuned to.

ELITE: DANGEROUS IS A RARE BREED FOR THE CONSOLE MARKET 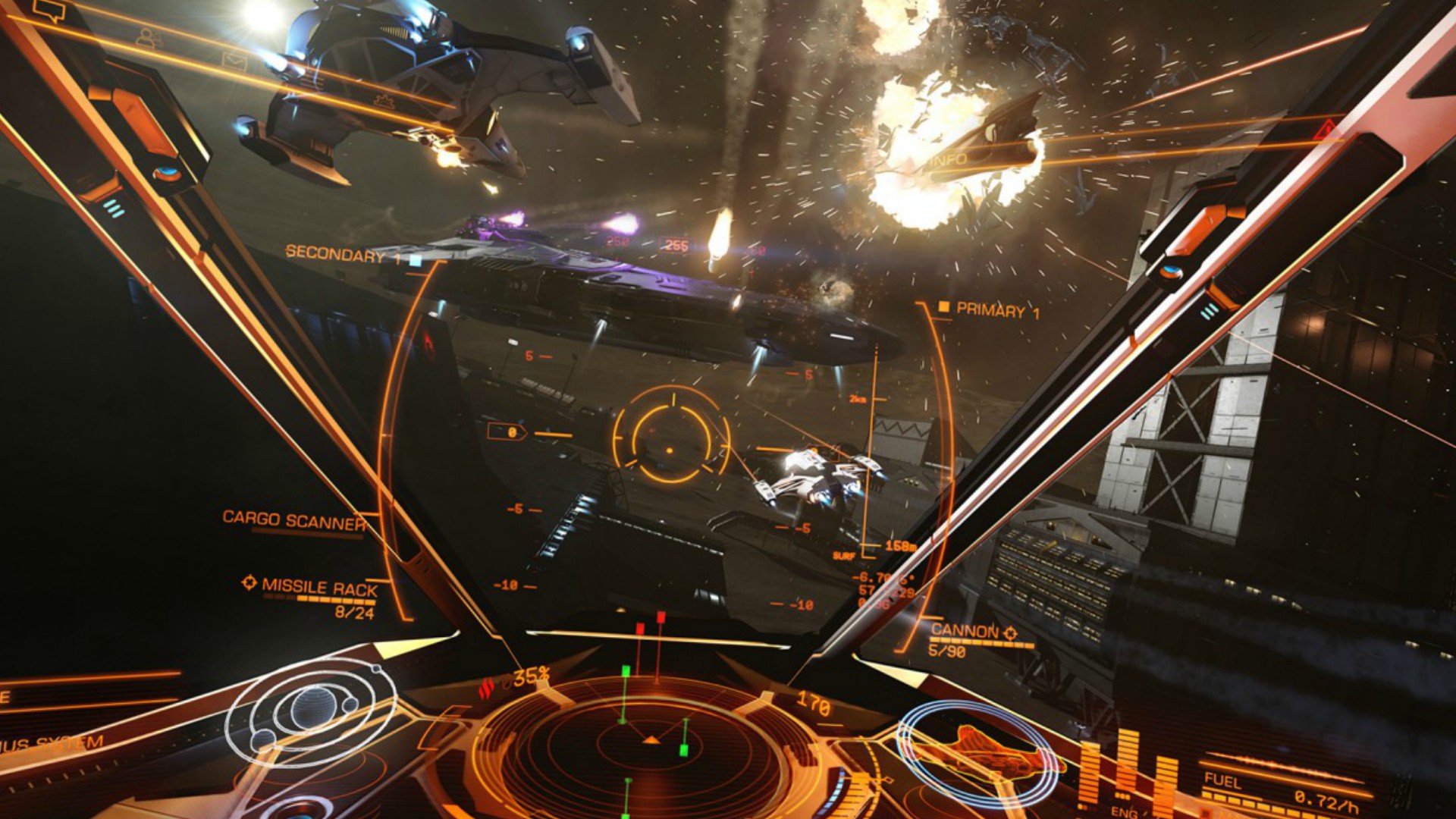 This is where the culture shock comes in. If you’re a gamer that’s only ever invested in console gaming, you’ve likely missed out on the cerebral experiences that the sim genre has offered before now. On top of that, you’re likely not to bother with RTS games, which offer incredibly deep user interfaces and multitasking of priorities the extent to which no other game genre offers. Make no mistake, Elite: Dangerous is a sim. A very well thought out one indeed. It’s not a typical console release. There’s no story and nearly every aspect of the game will not offer you instant gratification. From achieving objectives, to collecting minerals or space loot or even landing... Everything takes time and thought. As a result, managing any one of these things, no matter how trivial they may seem in description, is very satisfying.

THERE’S GRINDING… THEN THERE’S THIS
Yet console gamers will not be used to this extremely slow build up to reward. Or they may face a kind of disappointment that other AAA game studios are too afeared to make. For example, I was sent on a mission to find a ship’s black box in the floating remains of a space battle. That alone took around twenty minutes of scanning and pirate dodging (I was not equipped for a fight). When I finally found it, floating amidst the wreckage, I tweaked my speed in order to pick it up in my cargo chute. It may have looked stable but it turned out the thing was travelling at five hundred kilometers per second… It kept getting away from me so I cut my losses and raced towards it, hoping it would align with the pickup chute. 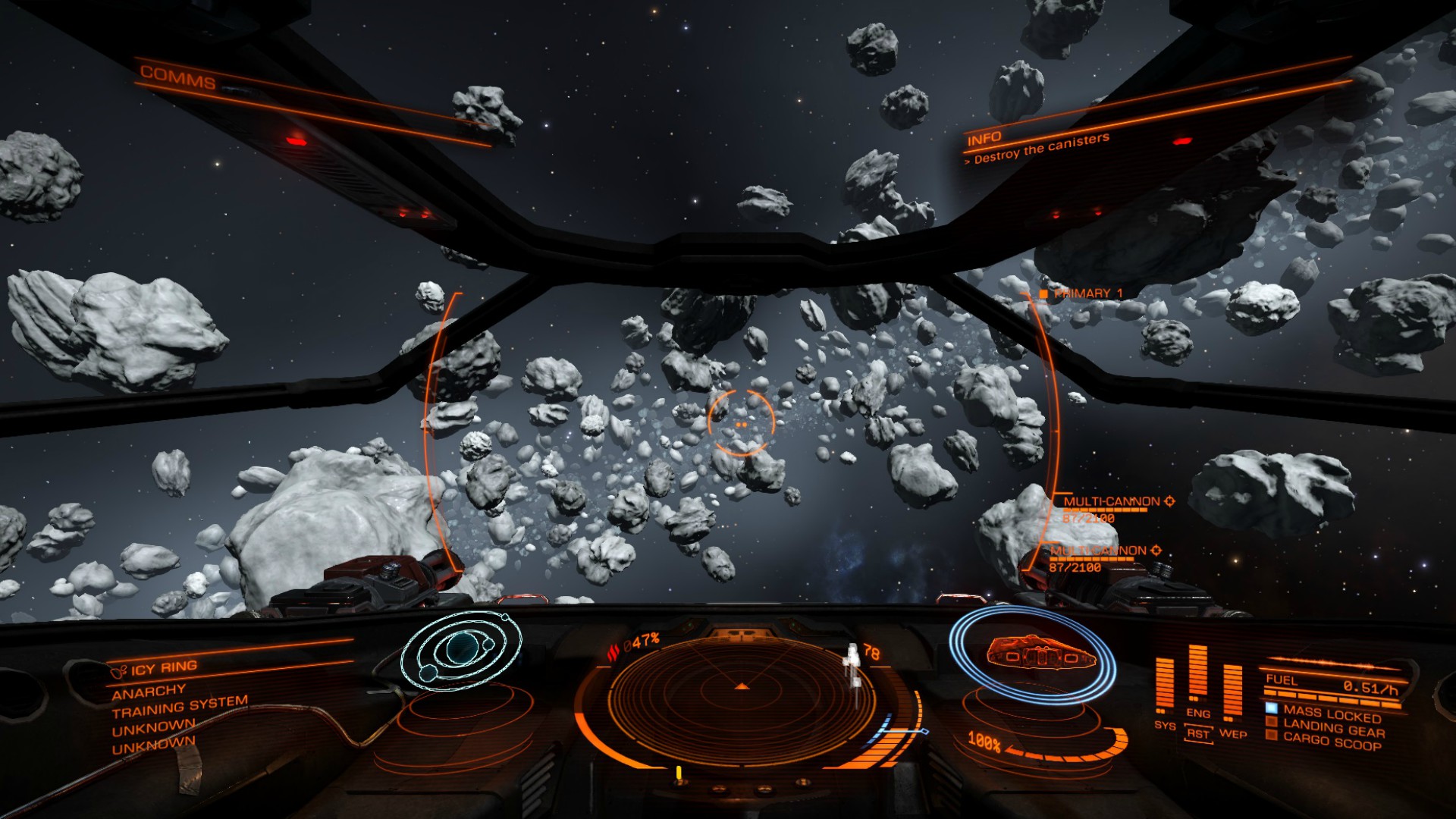 Alas, now travelling at double its speed, it ended up hitting the hull just to the left of my cockpit. A crashing sound was followed by my computer stating “object destroyed”. With that, I had to wave goodbye to my reward, my faction reputation and my plans for what to do next. Then I ran out of fuel, left to drift helplessly in space. Yes, I had to delete my save and start again...

It’s very important for a console gamer to understand that these are not failings of the developer, as may be assumed in most console titles. They are failings of the player’s understanding at such a point in the game. 99% of other AAA titles would have just made the black box indestructible. Or perhaps a mechanic where it would hit the ship anywhere and instantly be collected. As a result, every newcomer to Elite: Dangerous must strap in for a steep learning curve that will take hours and hours to surmount. There is no defined starting point in the galaxy or space stations that say “missions for starters can be found here”. Players need to analyse everything and make smart decisions before choosing the next step to success. Yet, this kind of learning curve has done wonders for From Software’s Souls franchise. So here's hoping Elite: Dangerous will find equal success on consoles.

HERE’S HOPING VR COMPATIBILITY WILL BECOME A THING
The lack of VR compatibility feels painfully present. On a game originally designed for a keyboard with way more button mappings than a controller, Frontier Developments are to be commended in condensing all of that down to a controller. One of the first things for any pilot to learn is where certain tools can be found in the cockpit. On top of tracking enemy ships during dogfights, the lack of ability to look around organically is sorely missed. Although all of this is nullified by the sheer amount of achievements I have to look forward to. 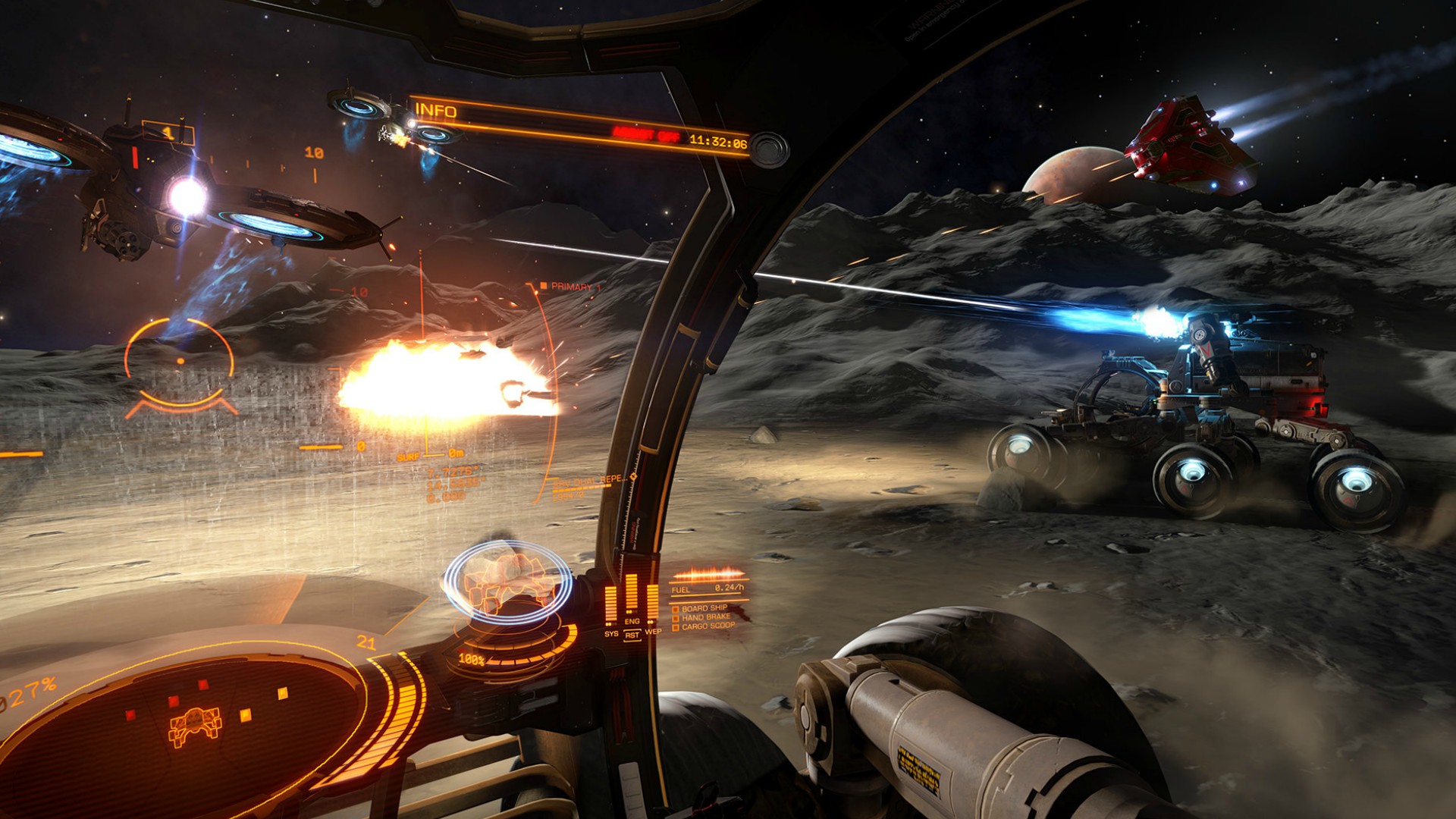 I can work towards building up my status from harmless and penniless to something more respectable. I could align with a faction, of which there are many, and get involved with the politics of the galaxy. I could become a warmonger and build up to a colossal ship, sending commands to my crew and fighters out to do the dirty work for me. I could even try to discover one of the four alien mystery sites found so far across the cross play servers. Thankfully, with the PS4 Legendary Edition release, I can make use of the Horizons DLC to explore planet surfaces and go on to mine resources and find riches that way instead.

BE PREPARED TO WORK HARD AND YOU’LL REAP THE REWARDS
Elite: Dangerous is a culture shock to console gamers not because of its content but because of how it is delivered to you. Players must work incredibly hard to achieve the slightest of things. They must also self teach the best way to land in space stations or on planet surfaces. You’ll also need a pre defined plan in your head for what kind of pilot you want to be. There is no room for a jack of all trades in this galaxy. The more work you put into understanding Elite: Dangerous, the more it’ll give back to you. Be it a thriving online community, mysteries of the galaxy or your own personal gratification. 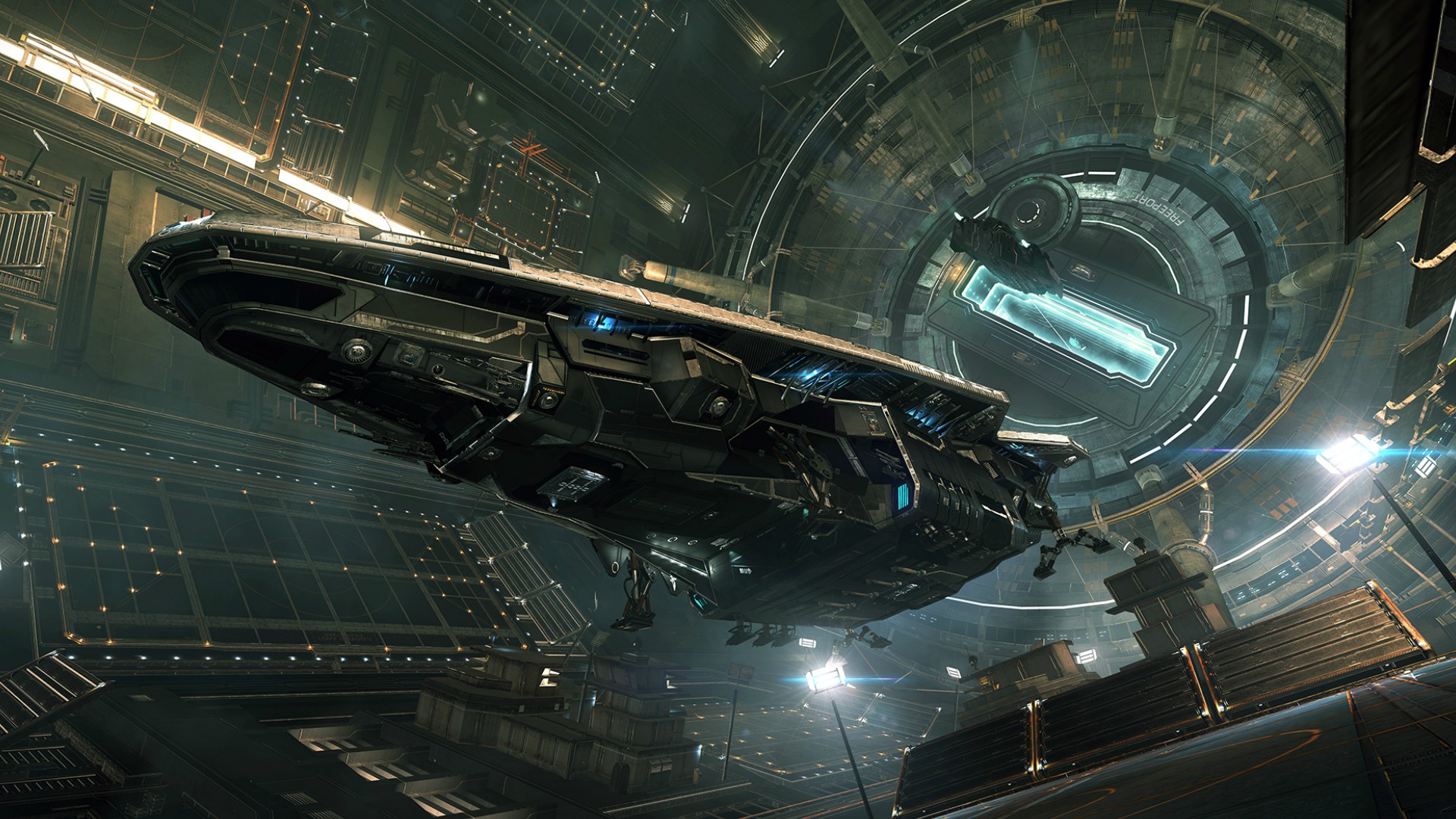 After enjoying nearly three years on PC, Elite: Dangerous currently offers thirty one ships to choose from. Each have a role to play in your chosen playstyle. Once you have the funds, it’s more about what you do with your ship. You could deck it out with paid for currency, of which you’ll have 1000 credits to start off with. In-cockpit and hull cosmetics are plentiful. More importantly, what you stick on your ship is what determines its usefulness in different areas. You could add pulse lasers and cannons or scanners and mining equipment. Perhaps you’ll want a happy medium between the two. Perhaps you’ll be be looking for a larger jump drive to hop between systems further apart. The list goes on and the depth of customisation systems in Elite: Dangerous is impressive.

ELITE: DANGEROUS IS NOT FOR EVERYONE BUT IS UNDENIABLY AN IMPRESSIVE WORK OF ART
Reaching that happy medium tailored to you will be a long self made quest in itself. It all adds to the “high satisfaction” level of achieving just about anything in this game. Anything like landing or combat can be performed by any old noob. But performing them well and with skill is another thing altogether. I hope I’ve communicated effectively just how much there is to learn and understand in Elite: Dangerous. If you’re more settled in the realms of Uncharted or pick-up-play-and-put-down kind of games, keep walking. Elite: Dangerous will not be for you. If you’re a gamer that appreciates extremely deep mechanics and doesn’t mind messing up before getting good - Elite: Dangerous is for you. There’s no hand holding in this game. So if you can persevere through the teething issues at the start, it’ll feel great to let loose the training wheels and tear through the galaxy with a newfound confidence.

We have 56 guests and no members online